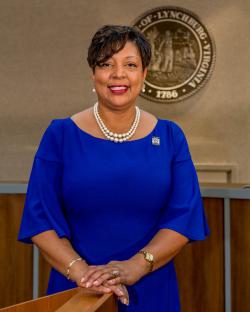 Treney Tweedy is a native citizen of Lynchburg. She grew up in Rivermont and is a graduate of E. C. Glass High School. Following graduation, she served as a Journalist in the United States Navy. After returning home, Treney graduated from Lynchburg College where she earned a Bachelor’s Degree in English.

She has received her Masters of Business Administration at University of Lynchburg. She has three adult children and is a grandmother.

She is the Executive Director at Treney Tweedy Consulting Services, LLC, specializing in communications management and public relations consulting.  She has a strong Baptist faith and believes that helping others is a lifetime priority. She enjoys home decorating, traveling and spending time with her family and friends.

Treney serves on the Lynchburg Redevelopment & Housing Authority, Horizon Behavioral Health Services Advisory Board, Step with Links Board, the Hill City Youth Football & Cheerleading Association Board and is a member of the Lynchburg Alumnae Chapter of Delta Sigma Theta Sorority, Inc.  Treney received a Gubernatorial appointment by former Governor Terrence McAuliffe and currently serves on the New College Institute Board in Martinsville, VA. She was recently appointed to Gov. Ralph Northam’s administration as a member of the New College Institute, a state-funded body in Martinsville offering bachelor's, master's and doctorate degrees through partnerships with Virginia colleges and universities.