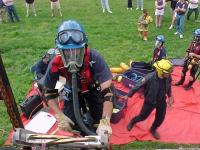 The TRT was formed in February of 1998 in order to comply with OSHA regulation CFR1910.140.  That standard requires that a capable rescue team be available before a confined space entry can be made.  Prior to the team’s formation, no city departments were in compliance.

During the following months, thousands of man-hours were spent training, purchasing equipment, fabricating tools, and refurbishing a truck in preparation for technical rescue responses. Team members were trained through the state Heavy and Tactical Rescue (HTR) program in rope, trench, confined space, and vehicle extrication.
In an effort to offset the cost of maintaining a specialized team of this magnitude, the Partners in Emergency Response (PIER) program was developed.  The PIER program was designed to share the operational cost of the team between the City and industries with confined spaces.  For industries, the PIER program is a cost-efficient means of compliance with OSHA confined space regulations.  The PIER program affords the Lynchburg Fire and EMS Department the opportunity to expand its emergency response capabilities and directly benefits the citizens of Lynchburg.
What began as an effort to address an industrial confined space issue culminated in the formation of a thirty-six member team technical rescue team trained not only in confined space rescue, but also in vehicle extrication, structural collapse, high angle and below-grade rope rescue, swift water rescue, and trench rescue. All of these benefit the citizens of Lynchburg on a daily basis.  A specialized team of the size and capability is a rarity in a city the size of Lynchburg