The Lynchburg Museum System has launched a new virtual exhibit as part of its year-long commemoration of the 100th anniversary of women’s right to vote in the United States. The new exhibit, titled Agents of Change: Female Activism in Virginia from Women’s Suffrage to Today, was created and shared by the Virginia Museum of History and Culture in Richmond. It is part of a statewide celebration of women and their impact on American democracy through political and social activism. The virtual exhibit can be viewed here. 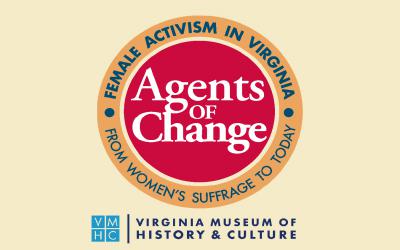 The ratification of the 19th Amendment to the Constitution in 1920 gave women the legal right to vote and banned gender discrimination in American democracy. Agents of Change focuses on the roles of women in activism, while celebrating their positive impacts on communities and the Commonwealth. The exhibit follows a variety of “change-makers” through the past century and tells the stories of women during WWII, the fight for equal treatment for the LGBTQ+ community, the push for the ratification of the Equal Rights Amendment and modern activism in Virginia today. These women fought for a more diverse and inclusive society and serve as empowering role models for rising generations of activists.
Agents of Change complements the Lynchburg Museum’s current exhibit, We the Women: Commemorating 100 Years of the 19th Amendment, Part I - The Battle for Ratification. This exhibit introduces the women’s suffrage (or voting rights) movement in America and highlights the work of Lynchburg’s two leading suffragists, mother and daughter Elizabeth Lewis and Elizabeth Otey. It also tells the story of African American activists who simultaneously fought for suffrage and against Jim Crow.  Part II of We the Women will open at the Lynchburg Museum later this fall.
The Lynchburg Museum looks forward to sharing its exhibits with the public using new digital and virtual platforms. As always, viewers are invited to share stories and add artifacts and images to the exhibit.

About the Virginia Museum of History and Culture
Located in Richmond, Virginia, the Virginia Museum of History & Culture is owned and operated by the Virginia Historical Society, a private, non-profit organization. The Museum’s mission is to connect people to America’s past through the unparalleled story of Virginia. The Virginia Historical Society is the oldest cultural organization in Virginia and one of the oldest and most distinguished history organizations in the nation. For use in its state history museum and its renowned research library, the historical society cares for a collection of nearly nine million items representing the ever-evolving story of Virginia.