Design matters – especially in public spaces. The built environment shapes our lives and impacts our well-being. While often overlooked, buildings have the capacity to influence us…even to encourage pro-social behavior, a hallmark of public spaces.
With the power of design in mind, staff moved forward with the renewal of the Jefferson Park Neighborhood Center. Built in 1976, as a social equity investment in the Dearington neighborhood, the Center needed significant upgrades. Federal CDBG funds were secured to advance the project and during the fall of 2019, the simple cinder block building was transformed into a twenty-first century community hub.

The Jefferson Park Center renewal project was completed in December 2019. The project was managed efficiently and infused the public facility with a renewed sense of value.  After decades of use, the Jefferson Park Neighborhood Center had been in need of rehabilitation. Renovations had been scheduled, but continually deferred, due to competing demands on the capital improvement project budget. The deterioration of the center reflected adversely on the City’s commitment to the neighborhood. To delay needed improvements would only have increased the cost of rehabilitation, so the Parks and Recreation secured funding for the facility renewal project through the Federal Community Development Block Grant program, with resounding community support.

The project was managed by the Parks and Recreation Department with the support of Public Works and Community Development colleagues.  Virginia A&E staff designed the project, infusing history, beauty, and purpose into the plan; Coleman-Adams Construction skillfully executed the design with attention to detail. The project budget was $202,418.

The 3,500 square foot facility includes a large recreation room, a small classroom, a kitchen, bathrooms, and an office.  To allow flexibility in facility use, the large open recreation room was designed to serve as either one large room for community gatherings, or as a series of interconnected spaces for small-group activities.  The flexibility of the design matches the need for different facility uses.

By selecting materials and finishes which were altogether economical, durable, and easy to maintain, the project management team demonstrated good stewardship of public resources. Here is a categorical summary of improvements.

The intentional design exhibits a strong connection between the center and the neighborhood and helps to create a pro-social space. By featuring views of the surrounding parkland with the neighborhood as a backdrop, the Center renewal project exemplifies neighborhood character. The Jefferson Park Neighborhood Center rehabilitation is a social equity investment which has enhanced and sustained programs, services, and park experiences for families in the Dearington neighborhood. 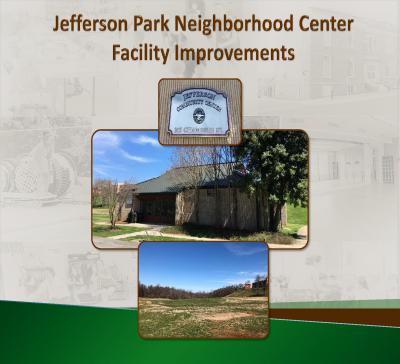