Garland Hill remains today one of the more distinctive and well preserved historic neighborhoods in Lynchburg. The district was named after Samuel Garland,Sr., who was among the first individuals to build on this gradual sloping hill. The neighborhood did not achieve the peak of its ascendancy until the late nineteenth and early twentieth centuries when some of the City's early tobacco and shoe industrialists began to settle in the district. In a hundred year span, this hill experienced a variety of architectural tastes from early Greek Revival to lavish late Victorian era homes. Garland Hill was originally developed outside of Lynchburg, but by 1870, the entire area was annexed into the City.

Garland Hill is a distinctive and well defined district. From its entrance off Fifth Street, straight along brick-paved, tree-lined Madison Street to its termination overlooking the Blackwater Creek ravine and along Harrison and Clay Streets, the district has a clear image and character. The buildings are of rich and varied styles and are grouped by size and scale in the sub-districts. The "avenue" effect of mature trees lining the street, particularly along Madison and Harrison Streets, is a striking feature of the district. The entire district is zoned R-2.

This distinctive street has an imposing character with exposed original brick paving, mature trees, and grand homes on deeply set back lots fronting from 60' to over 200' along the street. Stone walls and iron fences help define the edge of the lots and add character to the district.

This district is somewhat smaller in scale and size than the Madison Street corridor with 40 feet to 80 feet frontages and shallower setbacks owing to a steeper topography. Walls are more pronounced, particularly along the east side.

This small sub-district has more modest buildings than other sub-districts and contains large open spaces.

This sub-district forms the northern slope of the district. It is characterized by newer and smaller scaled houses mixed with smaller older vernacular houses and wooded open space along the slope.

There are 70 contributing structures in the Garland Hill Historic District and approximately 15 outbuildings, including several significant carriage houses. A large amount of rehabilitation activity has occurred in the district, particularly on Harrison Street. Several recently constructed residences in the First Street area do not relate to the historic district in scale, roof, number of stories or overall design.

Nearly half of the structures (47%) in the district are frame vernacular buildings dating from the turn of the century. Garland Hill contains the largest percentage of Queen Anne style residences of the historic districts (20%). Greek Revival and Classical Revival styles make up another thirteen percent. This district has the largest percentage of vertically oriented facades of all the districts (69%), reflecting the large number of turn of the century styles. As in all districts, a large percentage of the structures are two or more stories in height (93%). Sixty-seven percent of Garland Hill residences have front porches and 17% have front and side porches.

In keeping with the architectural variety of the district, 49% of the buildings are composed of wood, while brick, stucco, and a combination of materials each makes up between 10 and 15% of the district residences.

The dominant roof form is complex (46%), again reflecting the large number of Victorian styles. Likewise, slate roofing shingles are used in Garland Hill more than other districts (44%) while 37% of the buildings have metal roofs. 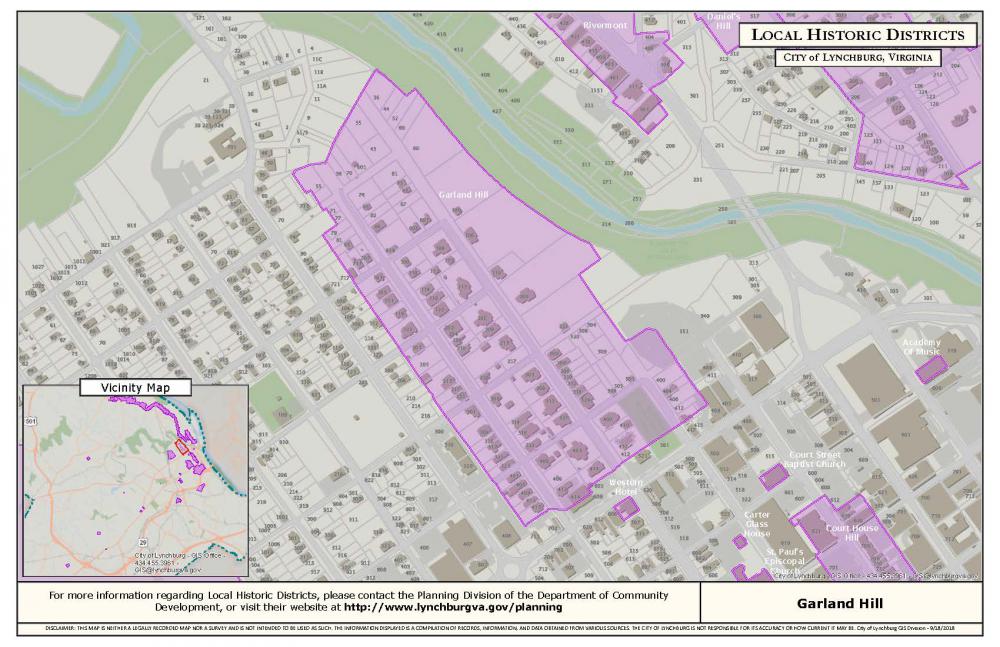