Federal Hill was well on its way to becoming a desirable residential neighborhood before its annexation in 1852. Many of the district's earliest houses were built in the 1820's and are known for their fine craftsmanship and proportions. Yet, Federal Hill developed slowly allowing for a variety of architectural styles ranging from the early nineteenth to the early twentieth century. These styles include Federal, French Second Empire, Queen Anne, and Georgian Revival. Federal Hill was originally a residential area for merchants and civic leaders, and its name is best attributed to early Federalist activity in Lynchburg.

Federal Hill has views toward downtown and is strongly defined by Federal Street as a wide avenue at its center. Federal Street contains most of the larger homes and other institutional scale buildings. Because of topography, structure size, scale, and character differences, areas at opposite sides of the Federal Street area make up distinctive sub-districts. The Jackson Street Area on the lower western slope contains many smaller scaled dwellings, while the Harrison Street area to the east contains a mixture of small to medium size residences along Harrison Street with less severe topography. The entire district is zoned R-2 with a small section of Federal and Ninth Street zoned R-4. These sub-districts are further defined below:

This two block sub-district stretches from Tenth Street south to its termination at the top of the hill overlooking Twelfth Street. The area contains two Federal style structures at the intersection of Jackson Street and Eleventh Street and a mixture of medium scale late nineteenth century frame dwellings.

This three block sub-district extends from Ninth Street to its intersection with Twelfth Street and contains several Second Empire style residences with their distinctive Mansard roofs as well as a various frame medium to small scale dwellings dating from the turn of the century.

Federal Hill is one of the smallest and most compact of the historic districts in Lynchburg with its 67 contributing structures and approximately 25 outbuildings. At least six demolition have occurred in the past ten years throughout the district.

In terms of styles, the frame vernacular dwelling is in the majority (60%). The Federal style and the similar Greek Revival and Colonial Revival examples provide for 13% of the district's residences, and 12% of the structures reflect the Queen Anne style. Lot sizes and setbacks are larger on Federal Street than in the rest of the district.

Again, there is almost an even split between horizontal (51 %) and vertical (49%) facades. The overwhelming building height is two stories or more (94%) and 85% of the structures have some type of front porch.

Of the dwellings in Federal Hill, 54% are constructed of wood reflecting the large number of frame vernacular residences, and 25% are made of brick, many of which are located on Federal Street.

There is a mixture of complex (39%). hipped (29%) and gable (19%) roofs reflecting the variety of styles in the district. 46% of Federal FEE structures have metal roofs and 42% percent use slate shingles. There is no concentration of either material in any sub-district. 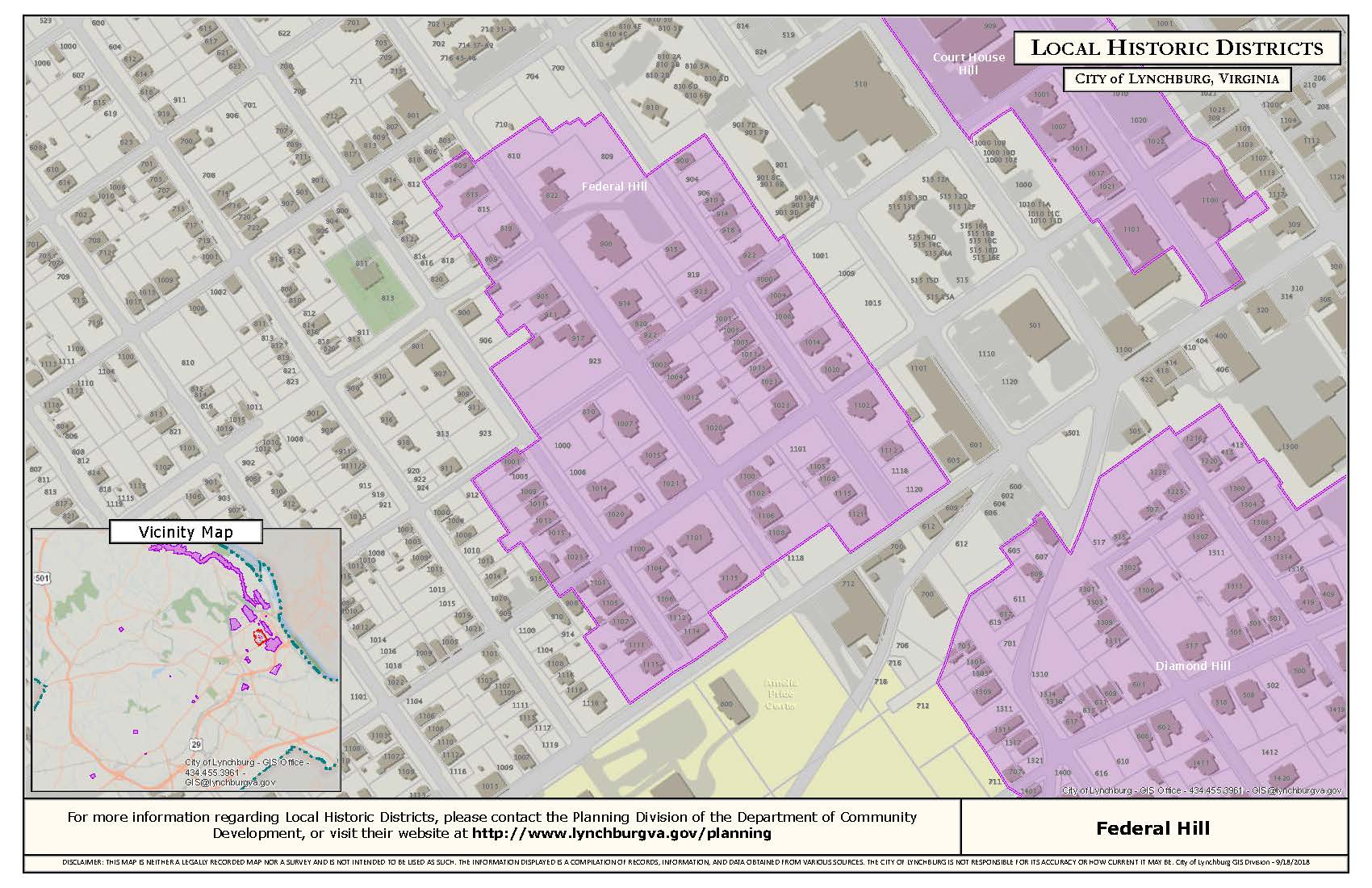