The Lynchburg Expressway separates Diamond Hill and Franklin Hill. The origins of Diamond Hill's name is not completely known but is attributed to the districts triangular shaped lots. Diamond Hill is believed to be the third of the seven hills to be designated by Lynchburg for development into a residential area. Although this hill existed first as a rural area, by the late nineteenth century the few original structures were razed to make room for large single family homes, speculative rental units and townhouses. Subsequently, Diamond Hill became one of the most desirable and elegant residential neighborhoods and was annexed into the City of Lynchburg in 1870.

Diamond Hill is the most complex and diverse of the historic districts, containing a rich array of architectural styles and building sizes. Bounded by steep slopes and the Lynchburg Expressway, it encompasses a complex network of streets in response to the difficult topography.  Dominant streets include Washington Street as the central spine with Church, Harrison, and Grace Streets as access streets. Many interior streets are dead-ended and several afford spectacular views of the city.

Structures and open space throughout the district are generally in good condition and well maintained. The district is nearly fully developed with few vacant lots or dilapidated buildings. The entire district is zoned R-2 except the Church Street area which is B-3.

This sub district contains small to medium scaled vernacular frame structures along Grace Street as it rises up Diamond Hill. At the top of the hill, the Diamond Hill Baptist Church and a former firehouse provide focal points for the end of the district.

The major spine of Diamond Hill is Washington Street, which runs from Grace to Church Street. It contains large scaled residences, most dating from the turn of the century and designed in Georgian Revival and Colonial Revival styles along with several Queen Anne examples as well.

This sub-district is comprised of the block of Clay Street and Madison Street that runs northwest from Washington Street, as well as Thirteenth Street that connects them. At the end of Clay Street. there is a set of stairs which descends the hill to Twelfth Street and the downtown area. Madison Street has a similar paved path connecting it with Grace Street. Clay Street retains its original brick paving and numerous trees which form an umbrella effect over the entire street. The majority of the structures are medium scale frame vernacular residences, except for several larger Colonial Revival structures on Clay Street.

This area forms the southern and eastern edge of the district and borders the Lynchburg Expressway. Most of the area is a steep hillside and the few residences within the sub-district are small frame vernacular structures.

This linear sub-district forms the northeast boundary of Diamond Hill and contains a mixture of frame and brick vernacular structures, browses, and a large one-story YMCA building built in 1956.

With 111 contributing structures, Diamond Hill is the largest of the five historic districts in Lynchburg. In addition there are between fifteen and twenty outbuildings, some of which are historic carriage houses. There have been approximately twenty demolitions in the past ten years, the majority of which have been frame vernacular structures on the edges of the district along the Grace Street corridor.

As with all of Lynchburg's historic districts, the frame vernacular dwellings dominate in absolute percentages (51%) with the majority of them located around the district's edges. The Washington Street corridor has the largest collection of Colonial Revival style residences along with parts of Clay, Madison, and Pearl Streets (16%). Examples of several important Gothic Revival, Italianate, and Queen Anne styles are also present in these areas.

As in most of Lynchburg's historic districts, there is a strong split between vertical (50%) and horizontal (50%) emphasis of the building facades.

While wood is the dominant building material (43%), a large number of brick structures (28%) reflects the many Colonial Revival examples on Washington Street.

The roof forms in Diamond Hill are almost evenly split between gable, hipped, and complex and in general, relate to the vernacular, Colonial Revival, and Victorian era styles.

Metal is the dominant roof material in the district (56%) with slate (25%) used on most of the larger scaled structures. Twelve percent of the roofs have been replaced by asphalt shingles; this statistic is similar for all of Lynchburg's historic districts.

Setbacks and lot sizes vary throughout the district but are fairly uniform along each street. Building heights are very uniform with 88% of the structures having two or two and-one-half stories. 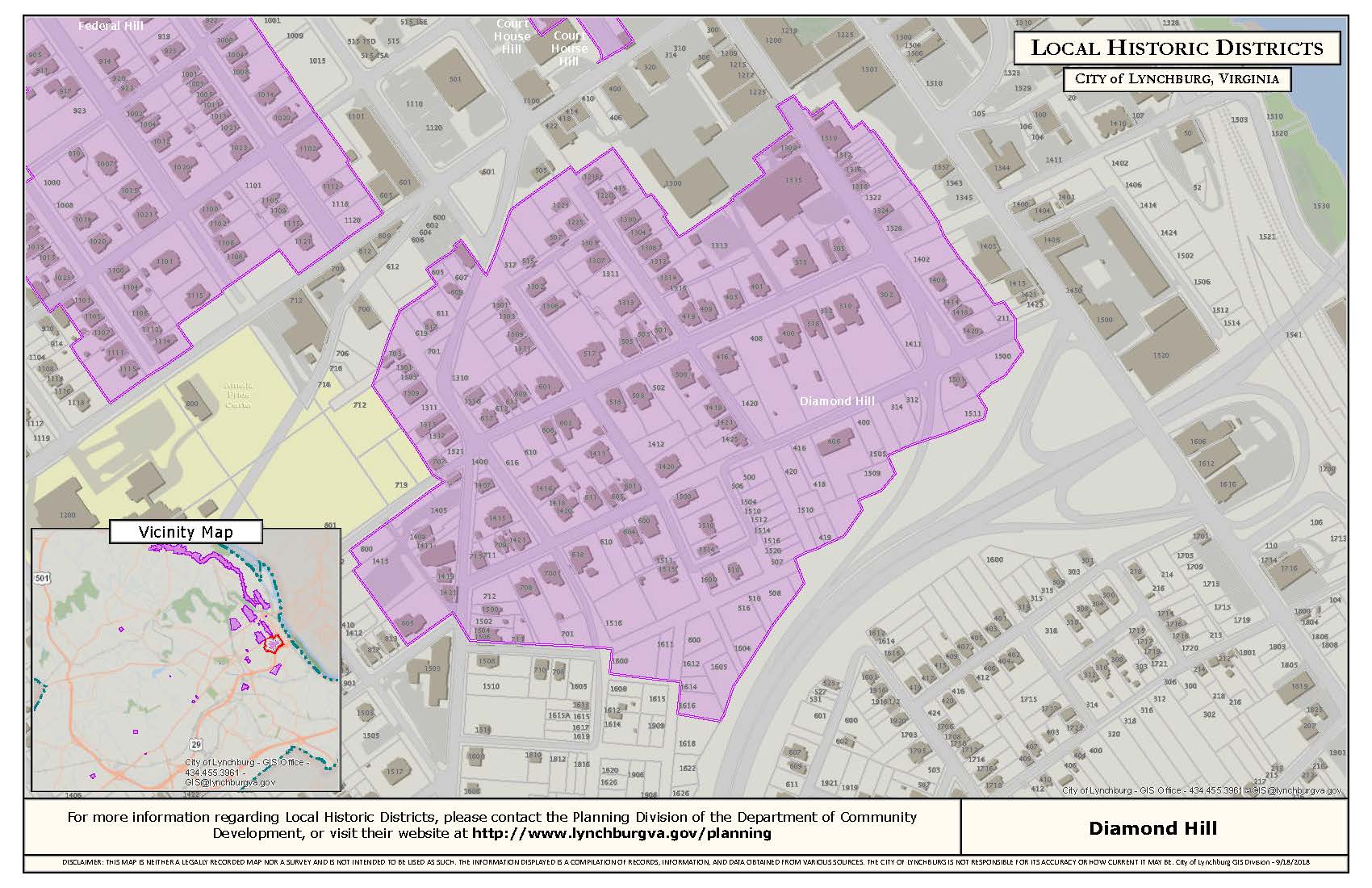