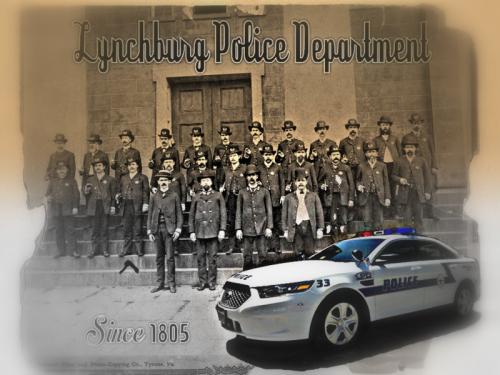 On January 10, 1805 Lynchburg was incorporated as a town which would be responsible for providing police services. One of the first acts of council was a bill in 1805 to establish a watch or patrol for the newly incorporated Lynchburg. In June of 1812 council made a further ordinance for the appointment of a police officer.

On August 1, 1880 A. H. Pettigrew became the first person appointed as Lynchburg’s “Chief of Police”. In May of 1883 Officer William Halsey Gouldman became the first Lynchburg Police Officer killed in the line of duty. During this period the Police Force was provided a horse-drawn police wagon equipped with a gong, to be sounded as a means of clearing traffic.

In 1903 Jacob D. Pendleton was appointed Chief of Police and initiated the use of “Gamewell Police Signals”. A Call box with a red light at the top of a pole for reporting incidents as they occurred. On May 17, 1906 Officer Wiley C. Metts was killed in the line of duty.  The Police Department received its first automobile in August of 1914. At the same time two motorcycles were purchased for a newly formed traffic unit.  By this time, sworn staffing consisted of approximately 48 Officers.

On March 29, 1920 Detective L. Arthur Mann was killed in the line of duty. In Approximately 1923, Police Headquarters was relocated from the courthouse to the basement of “Friends Warehouse”, located in the 900 block of Church St. The Warehouse served as a interim City Hall, until that land was deeded to the Federal Government for construction of a new Federal Office Building. The Police Department had temporary housing within a building at Tenth and Church Streets until 1933 when city offices moved into the newly constructed City Hall at 901 Church St.

On October 10, 1933 Officer George M. Ware was killed in the line of duty while investigating a domestic dispute.  In 1935 sworn officer ranks grew from 48 officers to 53, and Short Wave radio transmissions began with equipment installed at Police Headquarters and in patrol vehicles.  By August 5, 1941 two-way radios had replaced the short wave system. In 1946 Chief J. Hilber Boice instituted a structured departmental training program. December 29, 1956 Officer Walter Farrow and Officer Dickey were hired as the department’s first African American Officers.

The latter half of the 1960’s saw rapid growth and expansion for the Police Department’s resources, training programs, and the Police Officer’s overall mission within the community. Chief Wiley E. Gilliam instituted an annual “Lynchburg Police Department Training School” in 1966. Specialized units such as the Youth Bureau and Vice / Narcotics Units were created addressing specific community problem areas.

In 1968 Patrol Officers were first equipped with “Walkie-Talkie” radios. During the period of 1971-1972 a new “Public Safety” building was constructed at 905 Court Street to house the Lynchburg Police Department and the General District Court. Construction costs totaled approximately $800,000. In 1974 the department implemented a grant funded Cadet Program. This program became a very successful means for recruitment and hiring of young adults who received on the job training in a variety of assignments.  In 1974 Wendy T. Ford was hired as the department’s first female Police Officer.

The Central Virginia Criminal Justice Training Center was created in 1975 to meet regional law enforcement basic and in-service training requirements and held its first regional basic police school January 6 – April 2, 1976, with a class of 32 Officers.  In 1976 Lynchburg expanded its boundaries to a land area of approximately 50 square miles. Sworn staffing was increased by 20 Officers to meet the workload increase.  During this period a more diverse “Field Operations” Bureau was created along with an Investigations Bureau with specialized Persons, Property, and Vice / Narcotics components.

In November of 1989 the Lynchburg Police Department became the 124th law enforcement agency to be formally accredited by the Commission on Accreditation for Law Enforcement Agencies, Inc.  This period saw an expansion of the department’s computer system, and the Computer Aided Dispatch (CAD) system was implemented. In the mid 1990’s the department shifted towards a “Community Policing” operational strategy of community problem solving under the leadership of Chief Charles W. Bennett, Jr.  Bicycle patrols were implemented in 1995. The first K-9 team was established in 1996 with Officer John Sweeney and Spencer a Golden Retriever trained in narcotics detection. By the year 2000 the team consisted of five canines trained in performance of patrol, area search, tracking, and narcotics detection.

In 1996 the City of Lynchburg acquired the former First Methodist Church building at 805 Court Street and the Police Department expanded into the renovated building to house its Criminal Investigation Division, Personnel and Training Unit, and Crime Prevention. The facility was formally christened the “West Building”. In 1997 Officer Wallace W. Layne coordinated and instructed the department’s first Citizen’s Police Academy. As of 2015, the department has run 26 Citizen Police Academies, and 4 specialized Teacher Police Academies for employees of Lynchburg City Schools.

The department’s first School Resource Officers were implemented in 1997-98 with an Officer being placed at E.C. Glass High School. The SRO program was expanded so that both High Schools had Officers, as well as the Middle Schools.  In 1998, the Lynchburg Emergency Communications Center was relocated to a newly-built facility at 3621 Candler’s Mountain Road and is now managed by the Department of Emergency Services.  A Traffic Safety Unit was formed in 1999 to address crash investigations, and the enforcement of high profile traffic laws.