Developed as a residential area during the 1840's, Daniel's Hill was an elevated 900-1,000 acre tract of land overlooking the James River and Blackwater Creek. Originally, most of the land belonged to George Cabell, who built Point of Honor which today has been restored to its original form. The surrounding property passed out of Cabell's family and into the Daniel family through Judge William Daniel Jr., from whom the hill acquired its name. The main road leading up the spine of Daniel's Hill later came to be named after George Cabell.

Daniel's Hill exhibits a wide variety of architectural styles among its buildings constructed from the early to the late nineteenth century. The styles found among the larger homes include: Federal, Italianate, Queen Anne, and Georgian Revival. The Daniel's Hill Historic District also contains unassuming mid-nineteenth to early-twentieth century dwellings built as housing for workers. This hill was developed outside the Lynchburg city limits, but was annexed in 1870. Daniel's Hill is most prominently remembered for once being the epitome of Victorian elegance.

Daniel's Hill is a clearly defined linear district with Cabell Street, a heavily used traffic route, as the primary spine along the top of the ridge. Point of Honor, with major views over the City and the James River, denotes the southern end, while the northern boundary ends at "H" Street although the neighborhood continues beyond this point. Steep topography defines the east and west boundaries.

Daniel's Hill has a broad range of architecture including large mansions, modest dwellings and vernacular cottages located in several sub-districts. The southern end and middle sections along Cabell Street contain high style houses on mid to large size sites while the northern end contains more modest and smaller structures. A small neighborhood commercial area currently not being used as such is located at the corner of Cabell and "F" Streets. While generally built up, there are numerous underdeveloped or vacant sites reflecting numerous demolition throughout the district. All of Daniel's Hill is currently zoned R-3.

This important Federal residence is the focal point of the southern end of the district and has been restored as a city landmark. Dwellings on the back side of the lot were removed several years ago and the mansion is surrounded now by a block of open space with visitor parking along Norwood Street. Along the Cabell Street side is a row of frame vernacular houses of similar materials, size, scale, and setback.

This sub-district extends from "B" Street to "D" Street along Cabell Street and includes larger scale residences executed in a variety of architectural styles. There are several vacant lots in this district, as well as several large vacant structures poor in condition and in threat of demolition.

This sub-district includes several commercial structures at the "F' Street intersection of Cabell Street and continues to the end of the district at "H" Street. It contains numerous medium to smaller scale vernacular structures and the altered Greek Revival residence, "Rivermont," one of the earliest structures of the district (circa 1857).

This sub-district of small vernacular houses is part of a larger similar area along Norwood Street not currently a part of the historic district but which is a part of the neighborhood.

The 108 contributing structures that give character to Daniel's Hill vary tremendously in their style, scale and sophistication. This district is a study in contrasts between the large scaled historic mansions of Cabell Street and the smaller worker residences scattered around the edges and on the side streets of the district. The dominant architectural style is the frame vernacular residence comprising 77% of all dwellings in the district. the remaining 23% reflect the variety of Cabell Street with several examples of Queen Anne, Italianate, Greek revival and other nineteenth century styles.

As in most of the historic districts in Lynchburg, there is almost equal division of structures with a horizontal (52%) or vertical (48%) emphasis to their facades.

Again, as in most districts, the overwhelming height of the buildings is two or more stories (88%) and the great majority of structures have front porches (79%).

In the building material category, 62% percent of the district buildings are frame, reflecting the large number of vernacular residences. The original fabric of 25% of the structures has been covered up with modern materials such as aluminum or imitation brick siding, the highest percentage of altered materials in all of the districts.

The majority of roofs in Daniel's Hill are standing seam metal (56%) with slate (25%) used primarily on the larger scaled structures. Roof forms are more varied with almost half (43%) using the gable design.

Setbacks are varied in the district with most of the smaller scaled structures tightly grouped and close to the street. Several of the Cabell Street mansions have much larger lots and generous setbacks from the thoroughfare. 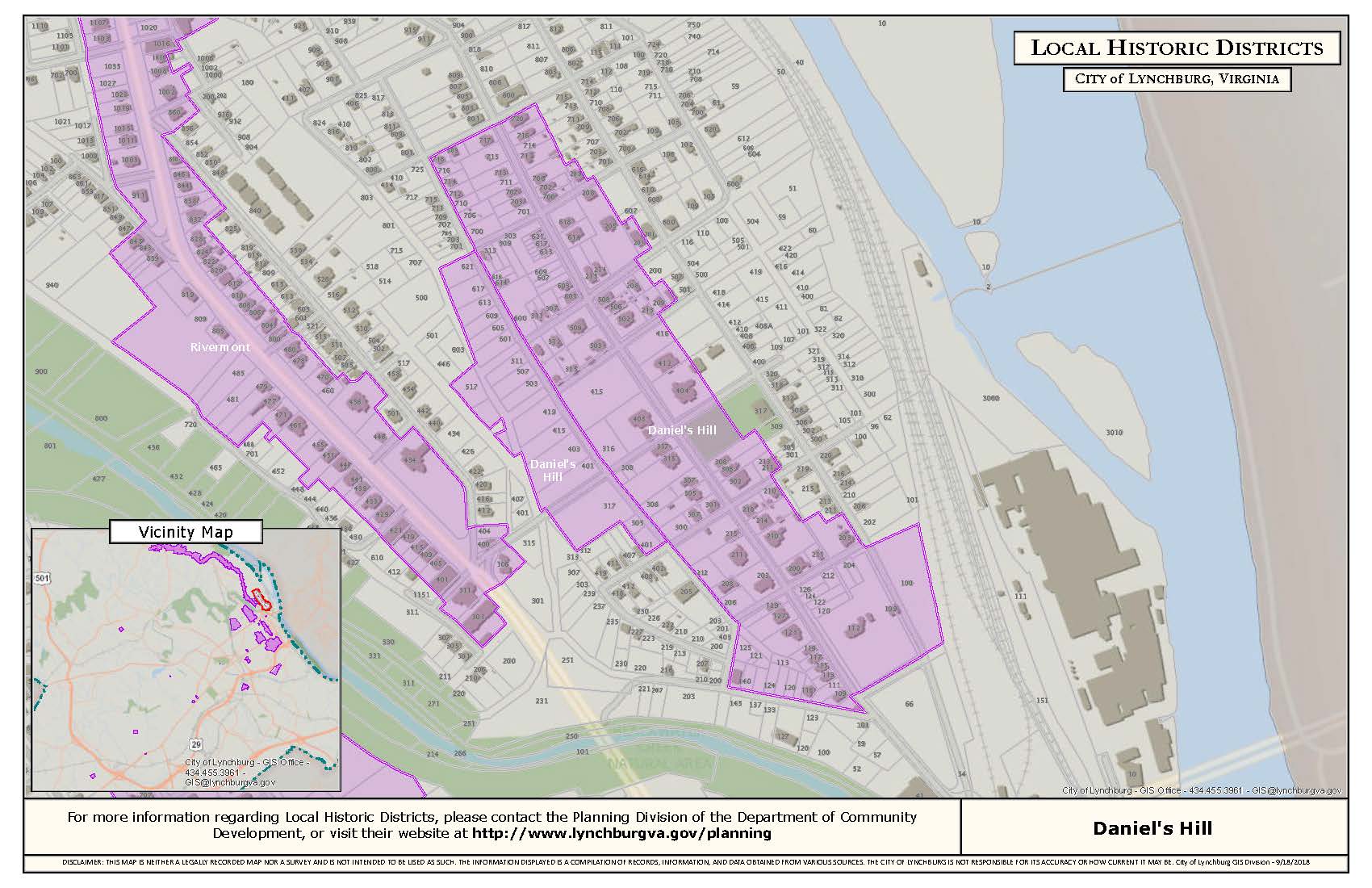