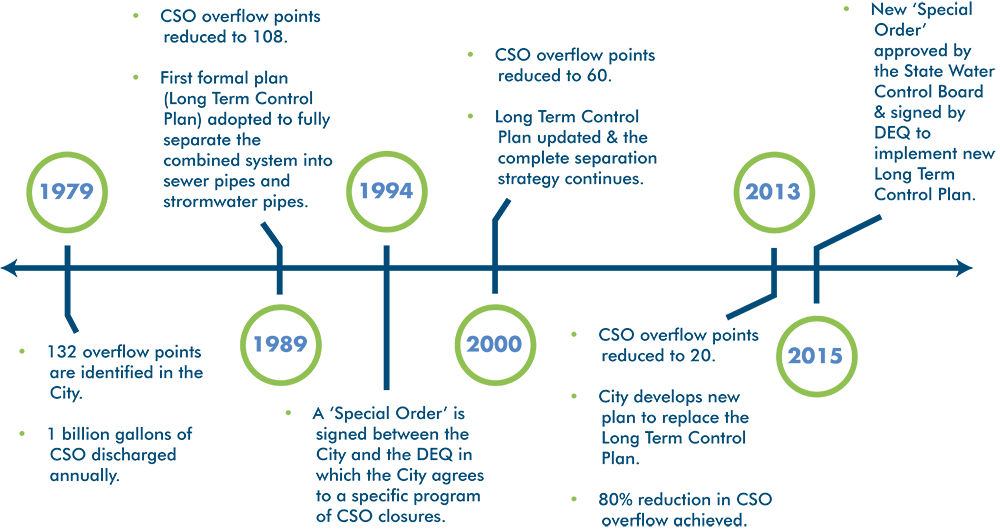 From 1979 until 2014, the City of Lynchburg worked to separate all combined sewer pipes into two different pipes: one for wastewater and one for stormwater.  This process meant that the City needed to construct a completely separate sewer system—something that was extraordinarily costly and time consuming.

During these years, $237,789,747 was spent to close the 112 overflow points where the combined sewage and rainwater discharged into streams and the James River.  The program successfully reduced overflow volume by 80% which meant that a less costly and time-intensive alternate plan could be formed to address the remaining overflow volume while still protecting our streams and the James River.

In 2010, the City began to review the CSO plan (officially called the Long Term Control Plan or LTCP).  Completed in 2015, the new CSO plan is to convey most of the combined sewage and stormwater to the wastewater treatment plant.  Under this plan, small amounts of stormwater and wastewater will overflow into the watershed during extremely heavy rainfall because 100% of the massive amount of volume cannot be economically captured and treated.

Keeping our watersheds safe and clean is our goal at Water Resources.  Under this new CSO plan, overflow volume will be reduced by 93% of its original amount and the City will easily meet State and Federal water quality requirements for decades to come!

To learn more about our plan, visit the Project Updates page.