Home » About » About Lynchburg

Lynchburg, Virginia is a c 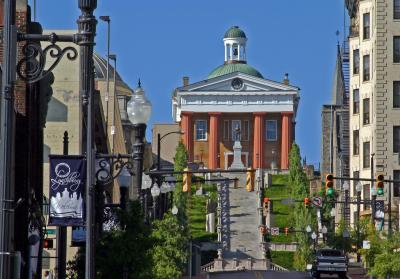 ity which remembers its past while focusing on the future - a vibrant central city fostering a strong sense of community, economic opportunity for all our citizens and responsive, results-oriented local government.

Lynchburg is a city of 50 square miles located near the geographic center of the state, bordered by the eastern edge of the beautiful Blue Ridge Mountains. It is located approximately 180 miles southwest of the nation's capital, Washington, D.C. Here's a list of 25 interesting facts.

An active community boasting friendly residential neighborhoods, Lynchburg has a tradition of outstanding public education. Lynchburg operates one of the top school systems in the state and is recognized for its unique Partners in Education program that partners the business and government sector with the schools. The city is also home to five public/private colleges and universities.

A city with outstanding cultural, educational, and recreation opportunities, Lynchburg operates 12 parks, 24 playgrounds, eight community centers, an Olympic-size pool, 34 tennis courts, and 26 baseball diamonds. Other opportunities include hiking in the Blue Ridge Mountains or on the Appalachian Trail; swimming and boating on Smith Mountain Lake, one of the country's largest man-made bodies of water; skiing at nearby Wintergreen Resort; or taking in a minor-league baseball game at the city-managed stadium.

Lynchburg has operated under a Council/Manager form of government since 1920. The City Council, comprised of seven members, is elected for four-year staggered terms of office. Lynchburg's City Council has created a vision to guide the community into the next millennium. Encouraging innovative approaches and focused, change-ready leadership, City Council's broad vision targets include stable, productive, inspired families; strategic economic development; an integrated education community; and a community environment second to none.

The City Manager is responsible to the City Council for the effective operation of all government functions. Since the early 1990's, the City has been actively engaged in high-performance development, which has resulted in innovative community/city partnerships; customer service improvements; regional visioning; and the increased use of technology in service delivery. A direct outcome of this work has been the development of a results-oriented strategy for government that will translate the vision and goals of City Council into an internal strategic plan that provides focus and direction for the organization.