Lynchburg was named for its founder, John Lynch, who at the age of 17 started a ferry service across the James River in 1757. He was also responsible for Lynchburg's first bridge across the river, which replaced the ferry in 1812.

In October 1786, the Virginia General Assembly granted John Lynch a charter for a town. The 45 acres granted for the town were his own land. Lynchburg was incorporated as a town in 1805 and as a city in 1852.

The Monacan Indian tribe lived in the Lynchburg area until well into the 17th century. Their chief village, Rassawek, stood near where the James and Rivanna Rivers meet in Fluvanna County. They were driven westward or killed by the Powhatans and Iroquois. Descendants of the Monacan now live in the Bear Mountain area of Amherst County.

The Society of Friends, or Quakers, was the first religious group to settle in Lynchburg. Although Charles Lynch, Sr. was a Roman Catholic, his wife, Sarah and daughter were instrumental in founding the South River Meeting House of the Society of Friends, the city's first house of worship. Although there were many Quakers among early settlers in Lynchburg, the numbers decreased as agriculture and industry in the South became increasingly dependent upon slavery, which the Friends opposed. The Meeting House, located on Fort Avenue, was restored and is now part of Quaker Memorial Presbyterian Church. 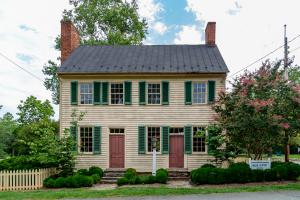 Built in 1791 by John Miller, a tavern owner and later owned by Samuel Claytor, the Miller-Claytor House was the fourth house to be constructed in Lynchburg. It was moved from the corner of 8th Street and Church Street to Riverside Park and restored in 1936 as a Sesquicentennial project of the Lynchburg Historical Society. 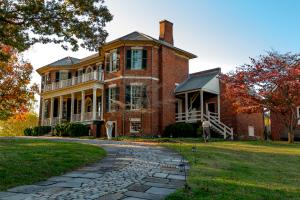 Built around 1815 by Dr. George Cabell, Sr., an eminent physician whose most famous patient was Patrick Henry. Point of Honor was the home of important Lynchburg area families, including the Daniels, Paynes, and Owens. Although not documented, it is possible that at some time Point of Honor may have been used as a dueling ground. However, since dueling was prohibited, it is speculated it occurred on the property in Campbell County to escape the Lynchburg magistrate. 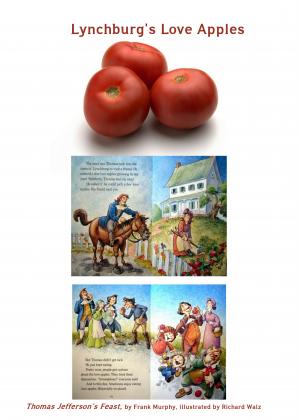 As early as 1815, the Federal style structure known today as the Joseph Nichols Tavern was a thriving "ordinary" or inn, near an extension of the Old Ferry Road, now the corner of Fifth and Madison Streets. It is probable that Thomas Jefferson lodged at the Tavern on his way from Monticello to Poplar Forest. In the 1840s the site became known as the Western Hotel and has since served as a hotel, a brothel and a rooming house. It was restored in 1975.

According to local legend, Thomas Jefferson, who was visiting the owners of the Miller-Claytor House on his way to his Poplar Forest home, took a bite of the "poisonous love apple." Supposedly, this was the first time anyone in Virginia had eaten this fruit, which we now call the tomato. 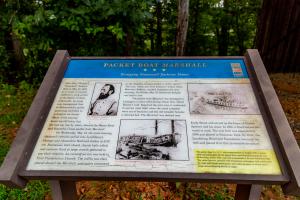 Packet Boat "Marshall," located in Riverside Park, carried General Thomas J. "Stonewall" Jackson's body to Lexington after he was mistakenly killed by his own sentry. On May 10, 1863, the Orange and Alexandria Railroad brought Jackson's remains to Lynchburg and made the transfer to the packet boat with the appropriate ceremonies.

From April 6 to 10, 1865, Lynchburg served as the capital of Virginia. Under Governor William Smith, the executive and legislative branches of the Commonwealth moved to Lynchburg for the few days between the fall of Richmond and the fall of the Confederacy.

In October 1868, Dr. Malcolm (Mahlon) Loomis, a part-time resident of Lynchburg, used a vertical antenna, a high-frequency detector and a sparkgap transmitter to successfully send electro-magnetic waves through the atmosphere, thus inventing radio, six years before the birth of the "father of radio," Guglielmo Marconi. Despite records that indicate Loomis invented the radio, he lacked the necessary funds to perfect his equipment and gain recognition for his invention.

In 1881, Lynchburg native William D. Diuguid invented the church truck by putting wheels on a catafalque, which had long been used as a stationary resting place for caskets. The church truck is still used by funeral directors nationwide. W. D. Diuguid, Inc., was founded in 1817 and is the second oldest funeral home in continuing service in the United States.

Lynchburg's Centennial celebration was held October 12 - 15, 1886, in conjunction with the Agricultural Fair. Festivities included a parade, fireworks, a band and horse races. John Warwick Daniel gave the opening address. On November 29, a centennial oak tree was planted in Miller Park. The tree is still standing today. In 1886 Lynchburg was the fourth largest city in Virginia; there were 49 miles of street, five of which were paved.

In 1889, Dr. Charles Brown Fleet, a young pharmacist who moved to Lynchburg in 1869, invented and began selling his Fleet's Chap-Stick lip balm. In 1893, Fleet developed the formula for phospho-soda, the basic ingredient for the Fleet Enema. Organized as C.B. Fleet Co., Inc., in 1916, the company developed the first disposable, small volume enema in 1953 and the first disposable douche product, Summer's Eve, in 1973.

Randolph-Macon Woman's College (currently named Randolph College and is now co-ed) was the first women's college in the South to be accredited and to receive a Phi Beta Kappa chapter. Founded in 1893 by Dr. William Waugh Smith, the college represented the South as one of the sixteen colleges for women in the United States classified "Division A" by the United States Bureau of Education in the early 1900s. It was ranked with Vassar and Smith.

In 1895, Dr. A. W. Terrell and Dr. Samuel Lile established the first hospital on record in Lynchburg—St. Andrew's Home, a private hospital at 917 Court Street. Terrell was the physician for Randolph-Macon Woman's College for 49 years.

In 1888, John Craddock, A. P. Craddock, T.M. Terry and Max Guggenheimer formed Craddock-Terry and Company as a wholesale distributing house for "boots, shoes and rubbers." The firm later became The Craddock-Terry Shoe Corporation and in 1901 built the first shoe factory south of the Mason-Dixon Line.

In the late 1800's and early 1900's, H.E. McWane turned two companies, known as Lynchburg Foundry Company and Griffin Pipe Products, into prosperous enterprises whose principal activity was manufacturing cast-iron pipe and fittings. Lynchburg was the first southern city in which cast-iron pipe was made, and in 1936 pipe and fittings became one of Lynchburg's principal industries, employing some 600 persons in the city. Today, Griffin Pipe Products still manufactures cast-iron pipe for municipal water systems.

Anne Spencer, a black poet born February 8, 1882 in Henry County, is the only Virginian whose works are included in the Norton Anthology of Modern American and British Poetry. After settling in Lynchburg, she established Lynchburg's first lending library for blacks and helped found the local chapter of the NAACP. Frequent visitors to the Spencer home at 1313 Pierce Street included Dr. Martin Luther King, Jr., Langston Hughes, Dr. George Washington Carver, W.E.B. DuBois and Jackie Robinson.

Extending from Church Street to Court Street with 139 steps, Monument Terrace was built in 1924 as a memorial to citizens who fought and died in American wars. At that time the original basin, located at the base of the monument steps, was replaced with a listing of Lynchburg's WWI dead and Charles Keck's representative of a doughboy, "The Listening Post."

Virginia Christian College, later renamed Lynchburg College and currently now called University of Lynchburg, was the first college to offer coeducation facilities in Central Virginia. The College began its first session in 1903 with 155 pupils. Although founder Dr. Josephus Hopwood believed in coeducation, men and women were not allowed to sit together at either classes or meals, unless they were brothers and sisters. Virginia Christian College was changed to Lynchburg College in 1919.

You can view lots of historic photos of Lynchburg here: www.lynchburgphotos.org.